It had become improbable, but it happened. Flights from the US to the French Leeward islands are suspended until, maybe, august 1st.  I was about to give up and return to Beirut, but I found a loophole.  By chance, I learned from a friend that flights in WinAir from Antigua to St Martin were operating.  Flying from the US to Antigua was also possible.  The only requirement was to have a negative COVID  PCR test (nose swab) no older than 72 hours.  There was always the risk that in Antigua they wouldn’t let me board the small plane bound to St. Martin because I was coming from the US, but I took the gamble.

Last Monday, April 6th, my daughter Sofia and I got the test done at a fire station in DC.  Many people were trying to do the same and there was a long line, but despite the heat and humidity we persevered (the test itself took less than one minute and it was painless).  We were told that we would get our results in  5-7 days.  When I checked a couple of days later they told me that, given a high demand for the test, it could take between 7 to 10.  Since port authorities in the Islands wanted results no older than 3 days, I thought it would be impossible to travel.

It happens, though, that the document with the results has the date of the day when it is sent, not the date of the day when the test was taken.  This, of course, defeats the purpose but it is how it works.  My hopes lighted up but then Sofia’s results came on Sunday morning; only Sofia’s.  This meant that she had to travel max three days later.  If my results came 3 days later (within the 10 days time frame), we would not be able to travel.  Fortunately, my results also came on Sunday towards the end of the day.   Immediately, I booked flights to Antigua departing on July 14th, Bastille day!

Both the flight DC-Miami and the flight Miami-Antigua were half-full and everybody was wearing a mask.   The worse part of the trip was having to wait in Antigua for 4 hours with no access to food or water.  Restaurants were closed and the vending machines broken.

When we checked-in they only asked for the results of the test; they din’t ask where we were coming from.  There was only one other passenger traveling with us to St Martin.  The small place from WinAir left one hour before the scheduled time.  Forty five minutes after take-off we were landing in St Martin.  The airport was empty and  going through customs was a breeze.  I was bringing with me boat gear including a new generator, but once I told them all was going to stay in Antares they let me in.  The officers were very kind and also helped us carry the bags and gear to a taxi.  There were no carts at the belts…

Antares is still on the hard at the boat yard.  As always, there have been delays with the work that needed to be done.  She will be hauled on Friday and we plan to move to the boat on Saturday. For now we are staying at Grand Case Beach Club.  It is a nice place and Sofia is having a great time. 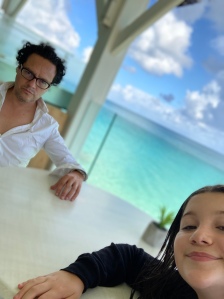 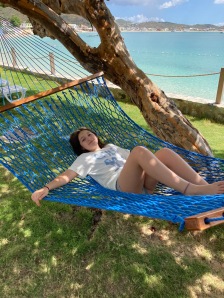 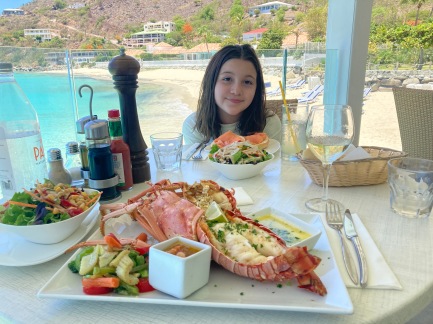